From Nuclear Heritage
(Redirected from Talvivaara)
Jump to navigationJump to search 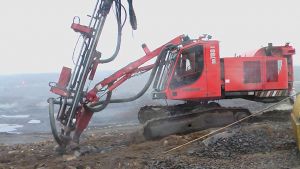 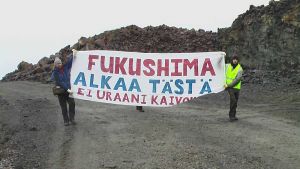 Protest against uranium mining in Talvivaara

-> draft for the book

Talvivaara is Europe's largest opencast nickel mine. Started in 2008, the mine operates 24 hours a day, everyday, in the Kainuu region of Finland, 550 km NNE from Helsinki. Mining, crushing, chemical bio-heap-leaching, and extraction facilities cover an area of 60 sq km, slightly larger than Manhattan Island, NY. Over 30 million tons was mined in 2010 and operations are expected to continue for 45 years, not including cleanup / restoration of the area. Talvivaara also extracts zinc, copper, cobalt, and uranium.

Russian based Norilsk Nickel has a 10 year contract with Talvivaara for nickel and cobalt which is smelted at their plant in Harjavalta, situated in the province of Western Finland[7]. It is documented that heavy metals pollution in the land around Norilsk Nickel's original factory are at such high levels that it would be economically feasible to mine the soil of the area[8].

Numerous problems at Talvivaara include chemical spills, widespread regional air and water contamination and chemical fires at the processing facility. The Economic crimes division of the Oulu Police are now conducting two investigations. Meanwhile, local people have been advised not to use well water for drinking, washing or sauna and complain of skin rashes and other symptoms they believe are due to Talvivaara[9]. The Kainuu Regional Environment Centre has discovered four badly contaminated lakes and three others 'less badly' contaminated[10].[11][12]

Despite these problems, an application to extract uranium was made by Talvivaara in Feb 2010 and is currently being considered by the Finnish government. A corruption scandal emerged when it was revealed that the Environment Minister of the time, Paula Lehtomäki's family purchased 300,000 euros of Talvivaara shares just before the uranium extraction application[13]. What is virtually ignored is that uranium is already being extracted from the ground, but is not being recovered or separated in concentrated form, a process that causes problems for secondary processors of ore such as Norilsk Nickel, and for locals who will be burdened with radioactive contamination as the uranium is now dumped in the gypsum precipitate pool[14]. It was this pool which suffered a serious leak in early 2010. In February 2011 Cameco, the worlds largest uranium producer, signed a contract with Talvivaara to build the uranium extraction plant on site. It is expected that 350 tU a year will be produced[5]. Their 45 million euro (US$60million) investment will be repaid by uranium deliveries should approval be granted. The Finnish government is expected to make this decision in the very near future. Euratom and the European Commission have already granted their approval for the uranium processing facility.

The danger that Finland, and Talvivaara specifically becomes a uranium processing facility is amplified by the large number of uranium claims now soon to be approved or rejected. Many claims for gold or phosphate mining make no mention of the known uranium deposits which will also be extracted, just as Talvivaara neglected to mention uranium in its EIA statements prior to government approval.

According to Talvivaara, "The recovery of uranium will have a positive impact for both Talvivaara and for its home province, Kainuu"[15]. Should the government decide to approve this uranium facility, it will condemn parts of Finland to a toxic and radioactive legacy. Local communities will mourn the loss of their clean nature and tourism, wonder where all the waste will go, but will regrettably, and belatedly discover that nuclear politicians cannot be trusted to represent us.

“Finland is ranked number one mining destination in the world”[16]