From Nuclear Heritage
Jump to navigationJump to search
Shortcut to this page: http://office.Nuclear-Heritage.NET 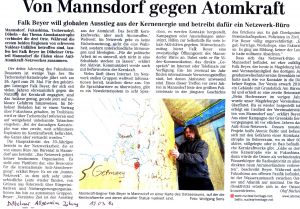 The International Network Office is focusing on nuclear issues, but also open for networking in other political fields. It's supposed to help to connect anti-nuclear activists internationally with others working in the same fields, to support if they are looking for experts or speakers on certain topics or to develop cooperation in mutual campaigns, projects and actions. A second aim is to provide multilingual outreach material on the topics of anti-nuclear activists and groups to spread the word internationally and to support the local efforts of people fighting nuclear power.

From now on, we are looking for new international volunteers with the Network Office. People interested to help to connect activists with each other or with experts in certain fields, to support network gatherings to be organized, and to coordinate the translation of reach out materials, are welcome to spend a certain time at the project house. You can volunteer for a time of one months to half a year, simple accommodation and food will be provided. You would help to prepare information an nuclear issues and to keep interested people up to date. - If you are interested, write to office AT nuclear-heritage.net[1].

During the office hours we are available for your calls, and this is the best point of time to contact us to speak to someone in person. We will try to help to get connected to experts or speakers for your events, or to other anti-nuclear groups for mutual campaigns/actions. If you are interested in joining projects of the network, like the NukeNews or the multilingual flyers project, the office hours will be a good opportunity to discuss issues in person.

Our aim is to offer this service on the long term. Thus, and as we are just starting with a few volunteers, we will provide office hours only one day week for now. Later, when we have more volunteers committing to help with the office hours, we intend to offer those on other days in the week, too. You can help to make this possible by volunteering yourself and by promoting the International Network Office.

The office hours are provided by volunteers with the Nuclear Heritage Network. No one gets paid for this, so please be aware that our capacities are limited, and be respectful.

During the office hours you reach us by phone, Skype or in person at the Network Office. We will also (not only, but then for sure) check the office emails and respond to email or mail correspondence. Find our contact information below.

After a long process of establishing the International Network Office, we eventually opened the office in September 2013. Some three international volunteers will be around most of the time this autumn and most likely until the end of the year. We started opening hours (every Wednesday from 2-4 POM CET/CEST) on October 2nd, 2013 - during these hours we will be available in Skype, jabber and telephone or for visitors. During these hours also some basic coordination work for the office and network will be done. To continue this work, we will need new volunteers for the beginning of 2014.

Since 2012 the rooms for the network office have been prepared in the project house in Döbeln (Saxony - Germany). Greenkids e.V., the grassroots organization which once founded the Nuclear Heritage Network, provides the space and equipment for this networking project.

We have desktops with computers, internet, phone, fax, printers, copy machine, scanner, cabinets and more infrastructure, technics and material as we share the office of the project house. There is also the storage of the international outreach material produced by the Nuclear Heritage Network, collections of contacts, an archive and library with lots of anti-nuclear books, studies, booklets and papers. A database of anti-nuclear groups (contacts) has been started, and another one with experts on certain fields is planned.

As of April 2013, several new anti-nuclear flyers are in process and should be produced until summer: a flyer about the atomic situation in Belarus (Belarusian, English, Russian), one about the Temelín NPP (Czech, English), another one about the Kola NPP (English, Russian) and one about uranium mining in the Czech Republic (Czech, English), a flyer about the atomic situation in Slovenia (English, Slovenian), new language versions of the flyer "Uranium - A Deadly Material" (Czech, French, Norwegian, Swedish) and a Russian version of the Gorleben flyer.

We are actively looking for people to volunteer with the network office. Activities for you are the communication with anti-nuclear groups, activists and interested people internationally to connect them with each other, to help them to find speakers for events or experts on certain topics. It's also about coordinating and helping with the production of multilingual outreach material to promote local anti-nuclear topics. Another field is the coordination or preparation of gatherings for networking personally and to stay in touch and exchange with each other.

We aim to have always at least two or three volunteers at once from different countries in the office. Your own networking ideas and activities like traveling to other places and participating in projects there would be fitting quite well to volunteering with the International Network Office.

Volunteers will be provided with accommodation and food during their stay in the project house. Besides that we would like to get resources for project activities organized like funding for gatherings, travel costs, outreach materials etc. However, this could be a possible task for the volunteers to arrange these financial resources for themselves, their projects and other volunteers in future. Donations of supporters are obviously welcome to realize the International Network Office.

You want to volunteer with the International Network Office? - Send an email to office AT nuclear-heritage.net[1]!

This project is not just provided by a big NGO or financially powerful institution, but created by the ideas of anti-nuclear activists and the will to realize them. We collect resources and aim to gather active people seeing the high capabilities for strengthening the anti-nuclear movements. However, the International Network Office needs the contributions of other activists, groups and organizations. If you are interested to contribute to this project with your knowledge, experiences, donations or by volunteering, please write to office AT nuclear-heritage.net[1].

The idea to establish an international networking office against nuclear power and GMOs has its roots in the very first network gathering of the Nuclear Heritage Network in Bure (F) in summer 2008. Since that time we discussed the project with several groups and activists, received much feedbach and developed some ideas for the realization. In each networking gathering it was one of the "future projects" to be discussed, but it took much time before it eventually started.

The International Network Office is located in the federal state of Saxony, in a county called Middle Saxony. It is part of the former German Democratic Republic (GDR), Eastern Germany. In Eastern Germany no power reactors are in operation anymore since the beginning of the 1990ies. However, the local grid operator is subsidiary of the atomic power company RWE.