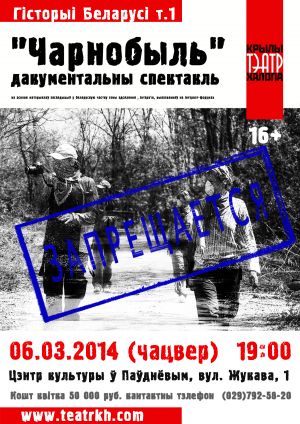 Kryly Halopa Theatre (ex –Free Theatre) is an independent alternative theatre and one of the not numerous alternative theatres in Belarus. It was created in 2001 in Brest city as the community of people joined with the political and creative views. The main prerequisite of the theatre emergence were the critical view on the surrounding reality, reaction to the political situation and a wish to join an art and activism. The main aim was the formation of the platform for the creative activity against human disunity, oppression and violence, the platform for overcoming the situations of constrained silence, passivity and society depression.

Since 2013 the theatre “Kryly Halopa” has started work on a documentary theatre project “Stories of Belarus”. The documentary theatre Chernobyl based on the authentic texts and documents, interviews and the fates of real people, technology verbatim and the most actual and contemporary topics of reality, is a genre that exists on the border of art and social analysis.

Invite the theatre to your region!

As part of the ATOMIC BALTIC network/project local groups around the Baltic Sea are welcome to invite the Kryly Halopa Theatre and their piece "Chernobyl" to perform in their regions. So local anti-nuclear struggles could be supported as the theatre will attract new people and media, and involve public from another point of view. Please contact the artists directly if you are intersted.

Ban of the "Chernobyl" project in Brest

On March 6th theatre Kryly Halopa should have presented documentary project "Chernobyl" to the Belarusian public for the first time. It was planned to present the performance, to conduct discussion with the invited experts and exhibition of children's drawings on the theme of "Chernobyl". Today, March 5th, at the full-dress rehearsal, we were informed that the show’s canceled because of the renovations, scheduled to begin tomorrow. While the activities planned for March 8th at the Cultural Center were not canceled.

At the Department of the ideological work with youth and culture, we were given an explanation that "at first the renovation (the money on which has been absent for a few last years, but recently has been found) and then the performance, but not immediately. At first, you have to present it to commission, and get the act of reception and only then show it to the public. "

Our last performance "The Pants" based on the play of P. Pryazhko was banned by the Commission in December 2012. We have no doubt that the same fate waits for the "Chernobyl", which raises much more acute issues. That is why we are not going to participate in a farce, in which the cultural functionaries are gathering not for artistic purposes but for the bans based on the political reasons.

We interpret today's "cancel of the performance because of renovation" as a covert ban. And we declare that once again the censorship in Belarus banned the piece of art which could be a bit inconvenient for existing system.

The "Chernobyl" project was presented earlier in Denmark at the International Theatre Festival "Transit" and at theatre festivals in Poland.