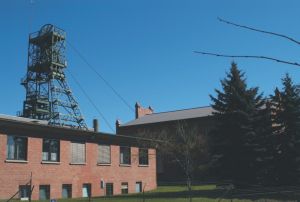 Shaft of the ASSE II repository mine

Information on the Research Mine Asse II

The Research Mine Asse II is located in the Asse ridge of hills close to the village Remlingen in the district Wolfenbüttel. Nuclear waste was deposited here in the 60s and 70s – for research purposes.

These experiments have been terminated, but the waste remains in the pit. Brine influx into the allegedly stable and dry repository was known even when the deposition began. For 20 years there has been an influx of 12 m³ per day. Now the mine is supposed to be flooded together with all the deposited nuclear waste. This is unacceptable! We demand the retraction of the nuclear waste, unless a comparison of various options points out a better solution for the further handling of the waste. 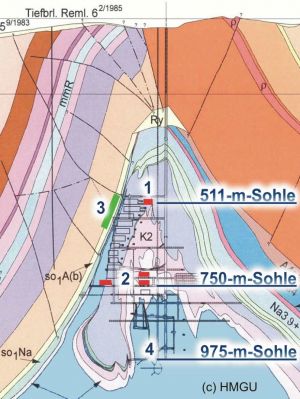 (1) The barrels with intermediate level waste were pushed from the level at 490 m into cavern 8a on the level at 511 m.
(2) The barrels with low level waste were first stacked, but later on most were dumped into the exploitation chambers and covered with salt grit.
(3) Location of the brine influx through which 12 m³ of liquid enter the mine per day.
(4) Brine swamp on the 975 m level. 74 m³ of highly polluted Cs-137 brine were brought here from cavern 12 on the 750 m level.

Almost any salt mine has problems with its structural stability due to its cavities. Both the Helmholtz Zentrum München (HMGU), the former operator and a subsidiary of the federal government, and the regulatory authorities have always claimed that the nuclear waste is stored dry and safe. Recently, both sides had to acknowledge that Asse II is not a dry mine and points of brine influx existed even before any nuclear waste was deposited. Arguing that the brine influx cannot be sealed and the structural stability of the mine structure is endangered, the HMGU promotes a premeditated flooding of the complete mine including the nuclear waste!

It is clear that in the case of flooding the waste barrels will completely disintegrate within 10 to 100 years. The fluid that has thus become radioactive will then be pressed out of the mine structure through the rock pressure and reaches deep strata of saltwater. These strata have direct contact with the biosphere. The sole remaining question is how much radioactive material will take how long to reach our environment and where this will happen.

The takeover of operations by the Federal Office for Radiation Protection (BfS) was announced in September 2008. This won't make a single barrel of nuclear waste safer. The goal of this change must be the cutting of old insider relationships, the application of nuclear legislation and achieving a comprehensible and transparent comparison of the different options for the handling of the waste. This must aim at the best achievable safety and should not be governed by economic considerations. Currently, a detailed plan exists only for the flooding of the nuclear waste. This project is depreciated for the enormous risks and dangers described above. As alternative, a complete retraction of the nuclear waste has been sketched in a rough concept. The retraction of the intermediate level waste is currently considered in detail, while a detailed planning for the retraction of the low level radioactive waste (more dangerous through the large amounts and radionuclides with longer half life) remains to be carried out.

Nuclear waste must be stored dry and bound. This was not possible in Asse from the start. This mine was never suitable for the storage of nuclear waste and offers the worst imaginable circumstances. As long as no concept is proven to be safer than a retraction of all nuclear waste, this is the only sensible option.

Demands of the Remlingen Declaration

Asse II is not a normal mine, but Germany's largest existing nuclear repository. The overburden at Asse is neither tight, nor stable, nor dry. The rock movements have increased unexpectedly and since 1988, 12 cubic meters of water flow into the pit. The nuclear waste cannot be continuously protected from uncontrollable influxes. Originating from this necessity, the operators want to fill the mine with a liquid solution and turn the nuclear waste adrift and leave it irretrievable.

This plan knowingly accepts the disintegration of the packaging and the pollution of the ground-water through leaking radionuclides within a few years.