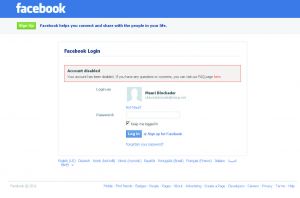 The anti-nuclear Facebook activist "Mauri Blockader" obviously became a victim of political censorship on Facebook. Mauri Blockader was organizing a couple of Facebook events and connected to about 700 people and groups through the so-called Social Network. The activist account was promoting the Olkiluoto Blockade and other anti-nuclear events in Finland, Germany and internationally. A couple of days after the Olkiluoto Blockade 2011, the account was not accessible anymore.

The Facebook account's name of "Mauri Blockader" was pointing to the former Finnish minister of economy being responsible for the atomic policy in Finland. Pekkarinen had supported and pushed the Finnish decision for 2-3 additional atomic reactors in summer 2010, after he had emphasized before he wouldn't see a need for more nuclear power in Finland. This statement that was obviously intended to calm down the protests against the atomic threat in Finland was later commented by him to have been "just a joke". As minister of economy he was responsible not only for the pro-nuclear policy of the Finnish government towards new NPPs, but also regarding the proposed new uranium mines that the atomic industry would like to see in the Scandinavian country.

Officially, Facebook argues that "fake names" are not allowed at the social network. As Facebook is full of fake names as many users don't trust Big Brother Facebook and it's surveillance of users and their private lives, it is no reasonable explanation. Instead, activists believe that the closure of Mauri Blockaders account was done for political reasons.

It seems obviously that Facebook was asked from external side to close this activist account. Otherwise half or more of the existing Facebook accounts would have needed to be disabled as a big amount of Facebook users is working with alias names or fake names. Mauri Blockader was only active within the - big - circle of their Facebook friends. Thus, the only one who actually could feel disturbed by Mauri Blockader would be the atomic lobby minister Mauri Pekkarinen, who is the eponym for Mauri Blockader, or his staff.