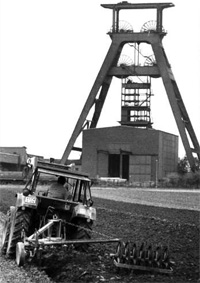 Photo of the Schacht Konrad final repository mine

Schacht KONRAD, the Konrad pit, is a decommissioned ore mine in the industrial heart of the steel city Salzgitter. Between 2013 and 2080, it is envisaged to deposit 303,000 m³ of solid or solidified radioactive waste with negligible thermal activity in this mine and keep them safe for a million years. This includes waste from nuclear reprocessing that contains plutonium, as well as operational waste from the energy industry and nuclear research. The federal government expects that the portion of nuclear waste from medical applications will lie in the order of a thousandth. These 303,000 m³ may contain 865 kg of plutonium.

20,000 industrial jobs and high-grade agricultural areas are located in the immediate vicinity of KONRAD.

The calculations for the longterm safety are mainly based on assumptions, not on data. These calculations are now several decades old, not on the current scientific level and have been questioned.

Operational dangers, stemming for example from the many transports in the dense industrial area around Salzgitter, were not considered in the approval. A catastrophe could lead to a considerable radioactive contamination across several kilometers, so that no one should stay in this area for a prolonged time period.

A EU-wide usage cannot be legally ruled out anymore. Foreign deliverers cannot be controlled, and as a detailed receiving control is not planned this could have devastating consequences.

The possibility of a drowning of KONRAD is deliberately taken into account and also conceded by the operator. The planned repository lies in a groundwater-conducting layer, which has direct contact to the biosphere between Braunschweig and Wolfsburg. Consequently, the repository does not meet the requirements laid out by the BfS in its synthesis report in 2005 for questions concerning the reposition of nuclear waste. Both in this report, as well as in the AkEnd (a board of experts on reposition), it is concluded that a future repository should lie in maiden geological strata and not in a mine that has been economically used. This should ensure that the barrier function of the overburden has not been over strained, as in the cases of Asse and Morsleben. This barrier has the key function in reposition concepts in deep geological strata, but is not intact in KONRAD. Therefore, the isolation potential of the mine is insufficient.

A further danger stems from the delivered waste while it is on the pit grounds. The transport into the mine will not follow immediately after the delivery and a temporary storage will be required. However, this has neither been labeled nor approved as de facto temporary storage.