In Slovenia several nuclear facilities exist: a Nuclear Power Plant in Krško, a former Uranium mine in Žirovski vrh near Škofja Loka, and the nuclear research institute "Jožef Stefan" with its "TRIGA" research reactor[1] in Ljubljana.[2] A central repository for low and medium level radioactive waste is situated in Brinje near Ljubljana.[3] 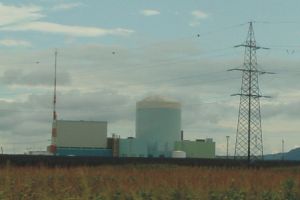 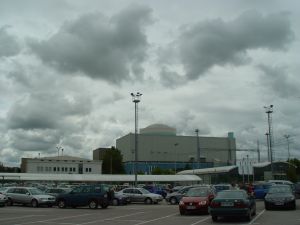 Another View to The Krško NPP Across The Plant's Car Park 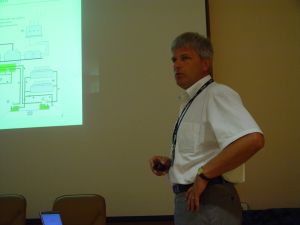 Žirovski vrh is the site where the tailings from the nearby uranium mine were deposited in the past. The mine was permanently closed in the 1990's and the site is now being sanctioned by the company in charge of the closure of the mine, Rudnik Žirovski Vrh, based in Todraž.[4][5]

"Our research in the domain of reactor physics is directed mostly towards development of new methods for research and power reactor calculations. We work on neutron, photon and electron Monte Carlo transport, nuclear data evaluation, advanced nodal methods, pin cell and fuel element homogenisation and on methods aimed at precise power distribution reconstruction. Several program packages for reactor calculations both for our TRIGA research reactor and Krško nuclear power plant were developed at our department. Since the initial startup of the Krško nuclear power plant we are preparing – in parallel with fuel vendor – entire core design report and also performing physics startup tests using our own – now widespread – rod insertion method. We also study advanced fourth generation reactors, advanced neutron sources and data and materials for fusion technology." self-portrait of the "Jožef Stefan Institute"[6]

Krško is the only Nuclear Power Plant in Slovenia. It is a Westinghouse Pressurized Water Reactor (PWR) technology Light Water Reactor (LWR) with a capacity of 696 MW. Operator is the Slovene Croatian company Nuklearna Elekrarna Krško" (NEK). The governments of Slovenia and Crotia made an agreement about the ownership, decommissioning, costs etc. of this plant on March 11th, 2003. 50% of the Krško NPP are owned by the Slovene electricity company GEN-Energija, 50% are owned by the Croatian electricity company HEP Electric. Responsible for the supervision of the nuclear safety is the Slovene administration.[7]

Krško started operation in 1983. It is planned to be decommissioned in 2023, but the nuclear companies and politicians already discuss to extend the NPP's lifetime. The industry applied this year for the extension. The fuel for the NPP is supplied by the German NUKEM company. It's origing from Russia the engineer director of Krško said. The Uranium is shipped for enrichment to the Columbia plant in the USA. At the end of the procedure the fuel elements are transported to Slovenia.[7]

Some dozen people regularly work in one shift in the reactor and some additional people in related facilities. Altogether some 500 people are employed directly by the Nuclear Power Plant.[8]

The plant includes a simulation installation of a control centre for the reactor. Every reactor driver has to absolve four weeks of training several situations in the simulator a year. Before changing to a new reactor state the staff has to train it in the simulator. Every 4 to 5 years the reactor drivers have to renew their licences including new examinations. Also the supervirsory authority sends its staff for training issues to the Krško simulator.[8]

At the present time as well GEN-Energija[7] as the Ministry of Economy discuss the construction of an additional reactor with a capacity of 1,000 to 1,600 MW in Krško. The estimated costs will be some 1.5 Billion EUR says the pro-nuclear lobby. Critics say that it is more likely that the construction costs will reach some 5 Billion EUR. In 2013 the construction is expected to begin, the operation of the nuclear unit should start in 2017.[2]

The situation with the low and medium level radioactive waste of the Krško plant is a little bit different. The government wants to establish a surface final disposal site in Vrbina nearby Krško some 70 meters in the ground. The community of Krško aggreed to these plans on July 6th, 2009. The administration decision is expected to be done in autumn 2009. In 2013 the repository is thought to be completed.[7]

Responsible for the final repository is the ARAO[9] - agency for disposal of radioactive waste. According to their website the repository has to be safe for only 300 years[10].

There is also a temporary disposal site for low and medium level radioactive waste from industry, medicine and research in Brinje near Ljubljana. It is in operation since 1986. Originally it was managed by the Jožef Stefan Institute, since 1999 the Agency for the disposal of radioactive waste (ARAO) is the responsible institution for the repository. The storage occurs on the surface. The radioactive materials are separated into waste in barrels, enclosed sources of radiation, and hazardous waste.

Overview of the Nuclear History in ex-Yugoslavia

In the former Yugoslavia three nuclear research institutes had been founded during the communist time: Institute "Ruđer Bošković"[11] (Croatia), Vinča Institute of Nuclear Sciences[12] (Serbia), and "Jožef Stefan" Institute[13] (Slovenia). In one of these institutes long time ago a big accident happened causing some 10 dead people, which was one of the biggest accidents in such a facility. Beginning in the 1960th the nuclear policy of the Yugoslav countries started with research for Uranium mining. The public awareness for the ecological challenges of nuclear power grew. In the past the media were not allowed to report about the accidents that happened in Yugoslavia. Instead, an artistic documentary film was produced, that was awarded international film prices. The secret service tried to prevent the presentation of this film, but failed because of the international and political prominence of the maker of the film.[2]

All Slovene parties apart from the Green party are pro-nuclear at the moment (August 2009). The general public believe is that Slovenia would be about to hit troubled waters without the NPP Krško. The parties and most politicians discuss neither alternative energy concepts nor energy reduction measures. Safety problems of nuclear facilities do not exist in the public awareness. Although at least the Slovene Green party/ies oppose nuclear power, media insist that in Slovenia nobody would be against nuclear energy.[2]

The NGO Focus is besides Greenpeace the only Slovene NGO to oppose against nuclear power in Slovenia.[2]

Currently a referendum is being prepared (by the government) for 2010. It seems that by this a new reactor unit in Krško should receive something like a public legitimation. Currently the public opinion is not against this new NPP: some 55-60% of the people seem to be for this new nuclear power station at the moment (which was in August 2009).[2]