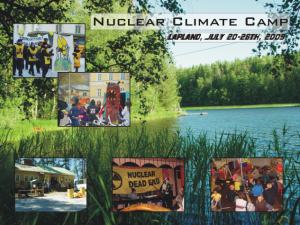 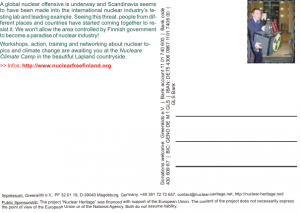 NO to Uranium Power

Welcome to join us in our protest camp in Lapland next summer! We won't allow the area controlled by Finnish government to became a paradise of nuclear industry!

Olkiluoto 3, the fifth reactor in the country is now under constuction in Western Finland. It´s being noticed that more than thousand mistakes have been made during the construction. The price of the reactor has been doubled, and the project is already three years in delay. The Finnish government seems to be that excited about the succee, that they'll be happy to let nuclear industry fix the economy of the country in future as well.

The problem with the wastes´ final deposit is said to be solved here, as in a first place in the world. There has already dug a huge grave for the high radioactive waste, even if It's been demostrated, that the project is absurd.

As Finland has the reputation of positive attitude toward nuclear industry, it's just logical that companies interested in uranium mining comes here as well.

This year we´ll have our protest camp in Lapland, near municipality of Simo, where Fennovoima (owned by german gigant Eon) is planning to build a nuclear plant side by the last rich salmon river at the area. Little community with economical problems is easy to buy, when the local politics are more interested in money than long run well being of the nature and the people. We´ll be also near Ranua, where french nuclear company Areva is about to start uranium excavation

The camp is aimed to be a space where local anti uranium and anti nuclear movements, NGOs and eco-radical groups that fights against finnish governments' energy politic and international movement against nuclear power can gather together, unite, and build a stronger movement. The program will provide information, skill sharing and action.

The camp will also be a space where we´ll share our visions about safier and nicer future. We'll learn to live respecting the nature and the people around us!

The current Climate Crisis has made real the unthinkable: the Nuclear Industry can present itself as environment-friendly! The nuclear industry, which should really be called the uranium industry, has made the most of this, and launched a global comeback, although it was thought to be in a steady decline only ten years ago. Finland has in many ways been leading the way (in the global North), starting with the approval of a new, fifth reactor in 2002; and now also the world's first ever final storage site for nuclear waste is being built, and there's prospecting for uranium and plans for new power plants plopping up all over the country. This has nothing to do with geographical suitability: the bedrock's full of cracks and seismically active, the Uranium amounts are likely quite small, and the Baltic Sea, which all the power plants will be placed along, changes water so slowly that it's already stored the highest amount of radioactivity in any body of water in the world. Rather, it has got quite much to do with political circumstances: Finland is on the fringe of the continent, the population density is low, and social protest is not a big thing; it's easy for the nuclear lobby to drive through their projects - and set an example, which is already starting to be followed by other countries in Europe and around the World. This is something we intend to change: A new antinuclear network is growing, and now we invite you to one of the most remote, sparsely populated regions of Finland and Europe, where the actual majority of the uranium prospecting and the proposed new power plant sites are under way; Lapland, home to Europe's only remaining indigenous people, the Saami; To a weeklong camp for action, networking and information - and for trying to figure out all the mess: The Climate crisis has brought us to a point where fossil fuels, whether oil, coal or uranium, will very obviously prove a very, very bad alternative in the very, very near future, and we really need to find other directions than never-ending economic growth. We Welcome You to join us in making this real! More information will come as arrangements proceed, at http:// For questions, response & to tell that you're coming, please contact: --@--