Shortcut to this page: http://camp2019.nuclearheritage.net

Join us in Döbeln!

We are inviting activitsts, experts and all people interested in anti-nuclear topics to join this gathering. We are pleased to announce that there will be another anti-nuclear camp this year, this time in Döbeln, Germany, from August 12th-18th, 2019. As previous camps in Germany (2017) and France (2018) have shown, it is a great opportunity for people from different countries and continents to come together and network, learn and share information. We have welcomed participants from the Americas and Asia and gained a more in depth insight into the anti-nuclear movement in the US, Turkey, India and Japan. We hope that this camp will bring together even more people from all over the world! 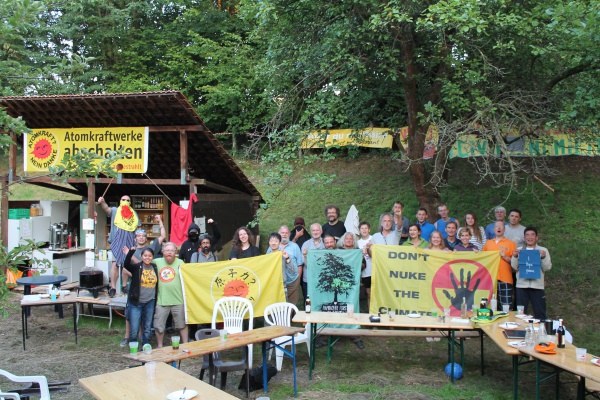 At the moment the program and our main focus points are being decided upon. As usual, we are looking for people willing to hold lectures and workshops. If you have something to offer, please get in touch! If you are a parent/guardian, you are very welcome to bring your children with you although we cannot promise that there will be dedicated children's activities – we are still in the early stages of planning.

We invite you to one week of anti-nuclear exchange, networking, skillsharing and other activities! Activists and organizers, and everyone else interested are welcome to join this international gathering, arranged by organizers with the Nuclear Heritage Network, an informal global platform of anti-nuclear activists. We consider this an important and valuable opportunity to get in touch with other people concerned by the nuclear industry and their lobby, to learn and to strengthen our campaigns and networks.

Since several years the Nuclear Heritage Network Gathering has been the only international anti-nuclear gathering in Europe, and thus it is one of a few occasions to discuss strategies and to find new allies for local anti-nuclear struggles. Again we anticipate between 60-100 people from many parts of the world to come together for this event like we experienced in the last gatherings. The 2019 camp preparation group is formed by activists from France, Germany, India, Japan, Latvia, Turkey, United Kingdom and United States. We are looking forward also to participants from lots of other regions.

You can expect to meet many interesting people who are interested to share their knowledge and skills with each other and who partly are organizers from anti-nuclear initiatives or organizations in different countries. We will prepare an extensive program covering many different topics of the nuclear field. There will be presentations and lectures, field trips and workshops. But the program will be open for additional input and ideas on the spot. And we invite every participant to share their information or to outline the situation of atomic struggles in their region. During the camp we will share responsibilities, help the kitchen group to prepare the food and organize the camplife together.

The gathering will provide simple food and opportunities for camping. There is no big NGO with big budget in the background, and we don‘t want to apply for big funding. Thus, everything will be organized on a low-cost budget. However, we want to make the participation possible also for people with low or no income and count on the participants‘ solidary with each other. No fixed fees will be set, but contributions based on a considered self-determined basis are necessary to make this event possible. Donations in advance are welcome!

You can also help practically joining the preparation group or volunteering for certain tasks like interpretation during the camp or translation of texts in advance, by spreading the word about the event, or by taking over responsibilities at the camp like providing vehicles for transport of material or railway shuttle, kids program, providing big tents or infrastructure and whatever you would like to offer. We will also need many people to help to set up the camp and for cleaning up and taking the infrastructure down again afterwards – for this reason we ask everyone who could help with this to join setting up the camp infrastructure already from August 7-11, or to help cleaning up and taking tents etc. down again from August 19-21.

The venue of the camp is located in Middle Saxony in Eastern Germany – Döbeln is a town with a good railway connection to Leipzig (70 km distance). Other cities nearby are Chemnitz (40 km) and Dresden (50 km); the distance to Berlin is about 200 km. Döbeln is also accessible via Autobahn A14 and A4.

This draft of program is in progress and will be extended stepwise until the actual camp start. 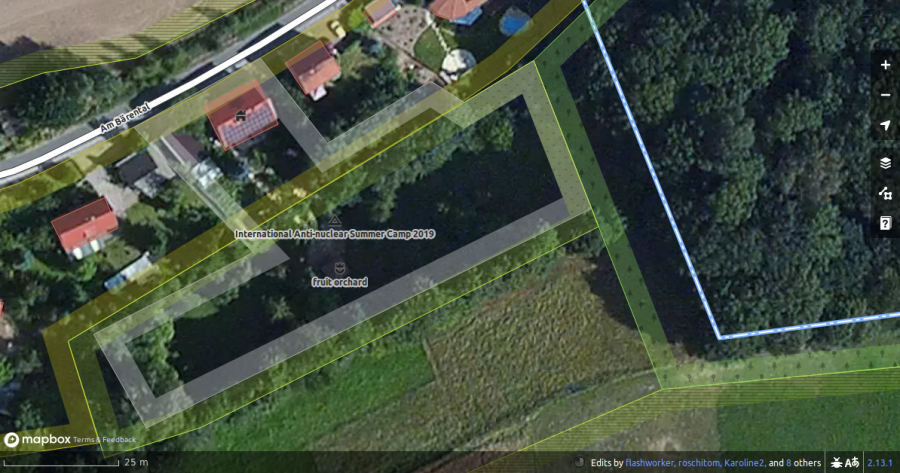 In case you can‘t even afford the reduced fee, please get in touch with the finances coordinators of the camp (camp-finances@nuclear-heritage.net) – we will do our best to make the participation in this gathering possible for everyone!

Already now we have to pay bills for the camp preparation. We would really much appreciate if you could transfer your participation fee in advance to our bank account, if you don‘t insist on doing it later in cash at the camp:

The overview of regions of announced participants is supposed to draw an impression of the composition of the gathering. The list will be continued:

The following organizations have financially supported the gathering:

We are no big fans of rules, however, here are basic things about the camp you need to know:

At the 2018 Nuclear Heritage Network Gathering in Narbonne, France, we formed a preparation group to arrange the follow-up event in 2019. Our group is currently composed by people from France, Germany, Japan, Latvia, Turkey, United Kingdom, United States.