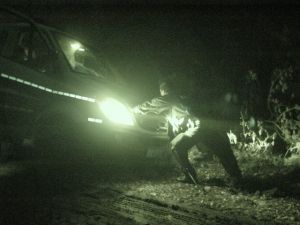 Police officers give a push to their van, stuck in the Wendland mud 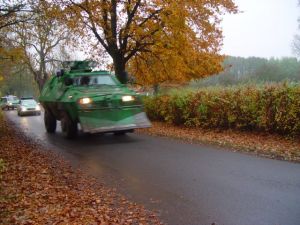 Where are these tanks and vans off to in such a hurry? 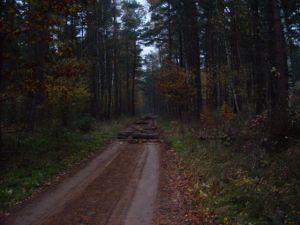 oops! Several barricades on a road near the Castor transport railway! 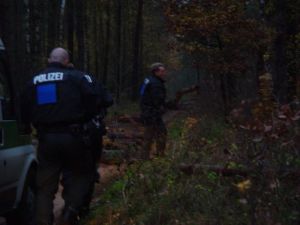 Police have a lot of hard work to do tonight 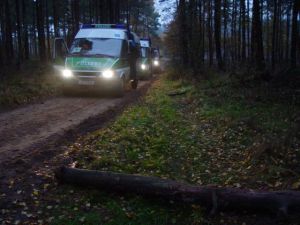 Now it's clear, and the vans can move... 50m to the next barricade

A very famous and traditional event within the anti-Castor activist's agenda is the forest „game“ called the „Ralley Monte Göhrde“. It began today, Friday 7th November at 14.30 with several hundred people participating in creative actions. Activists get virtual „credits“ for outcomes such as: building barricades, crossing the Castor railway (an activity that police try to prevent), taking stones from the road bed, intentionally getting told to 'go away' by the police, cutting down hunters' towers, as well as many other anti-authoritarian actions.

Spread over a large area in the forests of the „Göhrde,“ in the Wendland region of Germany, hundreds of activists used their direct action skills and dodged police successfully while building barricades made of tree trunks on the small country paths, and trespassing on the famous railway that will soon carry the toxic and radioactive load of the Castor transport. Some of the paths, which are very small but are usable by cars if driven carefully, were made completely impassable by activists eager to gain points by building very effective barricades (we know this well – we were some of the fools who decided to drive too near the railway and we became stuck between the quickly appearing barricades along with other activist cars and many police cars as well!).

These kinds of forest games help to prepare activists for the coming Castor transport, which will be slowed on its journey by effective direct action both on and around the railway. The game helps participants gain knowledge of the forest landscape, become more confident in their interaction with the police, and gain experience with different types of direct action. It also helps to prepare the landscape for the upcoming, more serious, actions by encouraging road blocks, some of which will stall police who may be on their way to break up blockades on the day of the Castor transport itself.

Police presence was heavy at the site of the game, with helicopters, tanks, police vans and cars, horses, and police dogs all present at different times to try to minimize the impacts of the activist participants. Despite this, the game was very successful and participants gained many points for their direct action efforts!

Later on the evening of 7th, a candle-light vigil was held in Metzingen. This is an interesting sort of vigil, as it has a double-meaning for people participating in the anti-Castor movement. Because candle-light vigils are generally considered to be religiously-motivated events, they are difficult demonstrations to forbid, so police had to allow for the hundreds of participants to gather. This event, however, turned into a large party on the street, with people eventually blockading it and causing consternation among police forces. One person was sent to hospital after scuffles broke out, and several demonstrators suffered head wounds due to police violence.

The Ralley Monte Göhrde has a long tradition and was part of the anti-Castor resistance in the last few years. It always starts in Metzingen, where there's also an info point and a resistance camp. Some years ago the police forbade all camps of anti-nuclear activists in the Wendland – as a reaction people in the village of Metzingen decided to open their barns and houses to activists and turn the whole village into a resistance camp – this is not possible to be forbidden. These days Metzingen is a resistance knot for hundreds of protesters.

You would like to see more images? Go to a further images gallery...

Back to the Castor Resistance 2008 overview page...