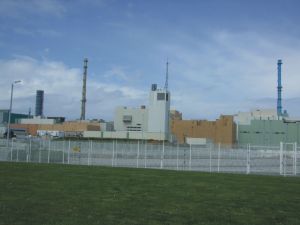 The La Hague area has been associated with nuclear activities for a long time. On the northern part of the Cottentin peninsula, on the Beaumont-Hague township, we find the French nuclear waste reprocessing factory (equivalent to Sellafield in the UK), known as the 'La Hague' plutonium plant and currently owned by Orano, formerly known as Areva. The original purpose of La Hague, built in the 60’s, was to produce plutonium for the atomic bomb. Now, it is officially used to separate the plutonium from the other wastes, in order to reuse it in nuclear MOX fuel combined with uranium (6-7 % of plutonium). But the amount of plutonium obtained exceeds the French MOX supply by far and the plutonium just accumulates in La Hague and becomes unusable after 5 years.

Despite all the safety claims from Orano, the waste separation is a very complex and dangerous process (see history below). It’s also producing a great amount of chemical and radioactive pollution, part of it in the form of effluents simply emitted in the air or in the sea (so-called ‘dilution’ strategy). The solid and most radioactive wastes, which have to be stored, are the depleted uranium (low 235 isotope rate) - not recycled - from the reprocessing plant, the highly dangerous actinide series and a long list of other minor radioactive / contaminated materials. Because of the risks and complexity of the waste separation, very few countries are able (daring?) to do it. For instance, Germany gave up in 1989 the construction of its reprocessing plant in Wackersdorf due to public opposition, and decided to send its wastes to ... France. So Orano is actually processing nuclear waste from many countries all around the world (Japan, Australia, Germany, Italy, ...) which implies frequent transports of very dangerous radioactive products. However, the cost of reprocessing is so high that it was abandoned by Sweden in 1984, Belgium in 2000, Germany in 2005 and suspended by Switzerland in 2007. Still, AREVA NC got new contracts with Australia and Italy in 2009.

Next to the reprocessing plant, the Centre de Stockage de la Manche (CSM) deposit site is hosting nuclear waste with low- to intermediate-level activity and a short life span (characteristic half-life lower than 30 years). It was created in 1967 on a former swamp. Not the best place, but nobody wanted this site anywhere. This center is full since 1994 and other storage sites are currently used in different places in France (Soulaines). Indeed, the amount of waste of this category is going to increase dramatically when old nuclear power plants are dismantled.

The resistance is becoming more difficult due to the huge economical impact of the nuclear industry in the region: Not only jobs but also a comfortable local tax revenue of € 170 millions annually.

Besides your active contribution, you can support our critical work through a donation to the following bank account:

Download this text as a PDF document (A4, 2 pages, 600 dpi) in French, German or English