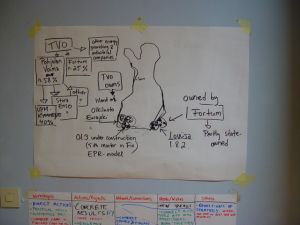 Map And Information About Nuclear Plants And Companies In Finland 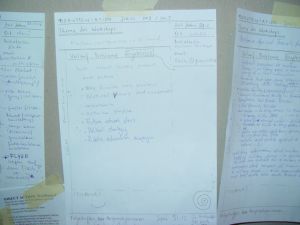 Brief Documentation Of The Workshop

Announcement of the workshop:
Regarding the workshops, I'd love to present 'a future of resistance' and introduce the ideas of the pledge campaign to resist nuclear developments, and the proposal to host a nuclear climate camp in lapland - summer 2009. Also to encourage the nuke activists to form a broader coalition with climate justice campaigns (now mostly coal focused) and to internationalise the pledge concept to countries promoting nuke (uk, italy, france, germany) and for EUrATOM.

This workshop was about the current nuclear situation in Finland, about existing and planned facilities and about the resistance and its history. At the moment only few notes of the workshops are documented here. Hopefully there will be more soon.

In Finland two nuclear power plant sites are located in Olkiluoto at the East Coast and Loviisa at the South Coast. Both in distance of between one to some hundred kilometers to Helsinki. Nuclear Power in Finland produced in 2008 22,038 GWh electricity (Total Power Production (including Nuclear): 74,137 GWh)[1][2], this number meets a share of some 30 percent of the Finnish electricity.

The Island of Olkiluoto is owned by the company TVO. The owners of TVO are Pohjolan Voima (ca. 58 %), Fortum (ca. 25 %) and other energy providing and industrial companies. Pohjolan Voima is owned by UPM Kymmene (40 %), Stora Enso (Forrest industry) and others. The reactors Olkiluoto I and II are Boiled Water Reactors (BWR), the reactor under construction, Olkiluoto III, is a Pressurized Water Reactor (PWR) of the type EPR. The EPR was designed by Areva, a German-French Jointventure company of the nuclear corporations Siemens and Framatome. This is the first construction of a new commercial nuclear reactor in the European Union since the 1980s. This is the first EPR reactor which will be constructed in the world, together with a further new EPR under construction in Flamanville, France this is a prototype for Areva to sell more reactors in the future.

The Loviisa NPP site is owned by Fortum, which is a partly state owned company. In Loviisa two PWR of the type VVER reactors are situated: Loviisa I and Loviisa II. In 2008 an application to build a third reactor at this place was submitted by Fortum. The low and medium level radioactive waste of these reactors are final disposed in the deep ground of the site. The high level radioactive waste will be taken to the Olkiluoto site when the final repository is finnished there.