From Nuclear Heritage
(Redirected from Fukushima)
Jump to navigationJump to search 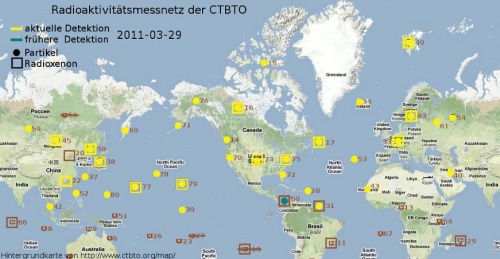 Another 6.5 earthquake occured on March 28 160 kilometers from Fukushima I Daiichi[21]. An even stronger quake at 7.1 having its epicenter in distance of 120 kilometers to the Fukushima NPP took place April 7 causing the emergency workers at Fukushima I Daiichi again to be evacuated from the site, while two of three emergency power systems failed due to the aftershock at the Onagawa NPP[22][23]. A nuclear meltdown occured in unit 2[24], the Japanese government ended up to admit on March 28[25] - "The battle to save the four crippled reactors is lost", Japanese officials conceded March 31[24]. Operator TEPCO informed not to be able to guarantee preventing another meltdown[21]. The IAEA informed on March 31 about a possibility of a "recriticality" at the Fukushima plant, which means a nuclear chain reaction would resume leading to more radiation releases, although the reactors were automatically shut down on March 11 due to the quake[12]. April 12 NISA classified the Fukushima disaster to INES level 7[5][4].

"Fukushima means 'fortunate island' but the region's luck melted down along with the reactors at the Fukushima Daiichi nuclear plant following the earthquake and tsunami."[26]

The atomic disaster in Fukushima has been classified an INES 7 accident by the Japanese Nuclear and Industrial Safety Agency (NISA) as demanded by Greenpeace and experts already long time before. Japan declared an "atomic power emergency" on March 11. Thousands of residents have been evacuated from the 20 kilometer zone around the stricken nuclear power plant. The disaster was caused by an interaction of a heavy earthquake of magnitude 9 destroying supplies and parts of buildings and a tsunami wave about 14 meters high destroying the emergency power generators. The emergency power batteries bridged a couple of hours, before the cooling systems failed totally. Exposed without any or enough water the fuel rods of one or more reactors melted down at up to 2,700 degrees.

As a result of the earthquake and the explosions in four reactors of the nuclear Daiichi complex several reactors' containment was damaged. A particular threat in this catastrophe is unit 3 of the NPP, a MOX fueled reactor containing large amounts of plutonium which is of special health risk due to its high energy radiation as a substantial alpha emitter and due to its specific toxic characteristics as well as because of its long-term halftime of more than 24,000 years.

New threats of catastrophic extend at the Daiichi units are uncovered every few days - often by foreign experts, while Japanese authorities and the operator of the blasted reactors yet downplay the impacts of the catastrophe and in many cases would not concede the incidents before being published by other hand. By April 9, some of these possible threats uncovered by a US newspaper are: a collapse of containment structures due to the weight of tons of water poured for cooling onto the reactors; a molten core could melt through the bottom of the pressure vessel; a new hydrogen explosion destroying the containment and releasing large amounts of high radioactive substances; increased risks caused by seawater that had been used in the emergency cooling operations.

A fire occured close to block 4 on April 4 and was quickly extinguished after it had been recognized.