Located at the village Morsleben close to the former inner-German border not far from Helmstedt is the central repository for radioactive waste of the former German Democratic Republic (GDR). This nuclear facility was taken over by the federal government in 1990. Most of the radioactive inventory now originates from nuclear power plants in the Federal Republic of Germany (FRG). The ERAM is a former mine for potash and rock salt. In 1969, it was chosen as nuclear repository for the GDR.

Liquid radioactive waste was sprayed onto a layer of lignite ashes assuming that the mixture would solidify. This hope was not fulfilled and large amounts of radioactive liquid have dripped even to the lowest levels of the mine. Another procedure was employed later that was then also stopped, shortly after the takeover by the federal government.

Some of the solid radioactive waste was dumped loosely or in barrels into reposition cavities; alternatively, the barrels were stacked. Through the dumping, many barrels were damaged. Some radiation sources were sunk into drill holes. 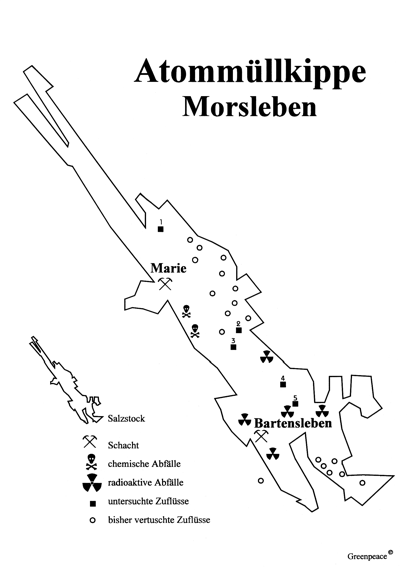 As early as 1969, the danger of collapse in parts of the mine in Morsleben was known. Hence, this was known even before the first approval of operation was issued.

Water influx is another long known problem. For several decades, five drip leaks have been closely documented. For one of these, a connection to the overburden is known. Multiple other drip leaks that until then had been hushed up were uncovered by Greenpeace in the 1990s.

Fundamental geological disadvantages have an impact on the safety of the repository: The salt dome is intercepted by strata of easily soluble potash and porous main anhydrite. This increases the danger from water influx by providing easy points of attack. The different hazard factors (insufficient structural stability, water influx, movement of the overburden) influence and aggravate each other.

The high complexity of the repository complicates safety assessments. Seven levels, hundreds of caverns, tunnels, pits and connecting halls together with the folded geological structure make the ERAM an incalculable risk. During the last few years, two situations of acute danger occurred requiring immediate response: In late 2000 several cavities in the southern field of the repository had to to be covered with salt grit and slack to prevent that rocks falling down from the ceiling would spread radioactive materials that could then spread further through the ventilation system. In October 2003, another measure was started to counter the imminent danger of collapse in the central part of the repository. Until spring 2011, 935,000 cubic meters of salt concrete had been backfilled in this part of the repository.

Initiative against the nuclear repository Morsleben